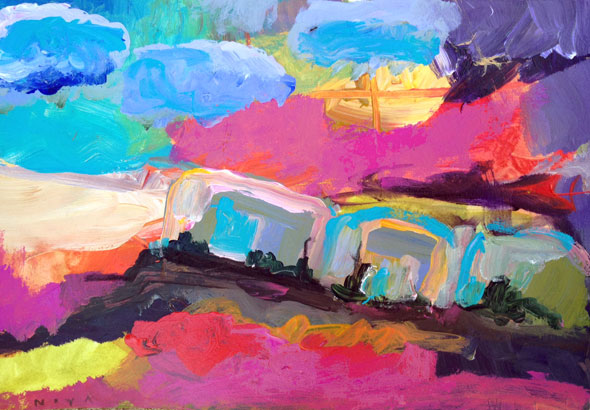 Sadly, this painting is being posted as I leave Santa Fe. Two abstracts of Georgia O’Keeffe’s home/studio sourced from photographs from Santa Fe travel photos (internet). That O’Keeffe makes me want to be more, better and focused so intensely like the sun isn’t hot wearing black. She’s got style.

Project notes: This abstract and the one I will post tomorrow is a new discovery for me. I will be exploring it a lot more in September when I paint landscapes. 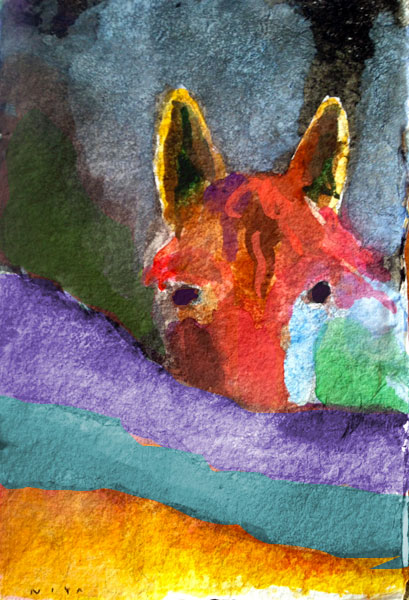 Peek-a-boo! I see you having your coffee. Didn’t you forget to feed me first?

Project notes: 200 paintings. I can hardly believe it! That might be as many as I previously completed in my lifetime. Excited! 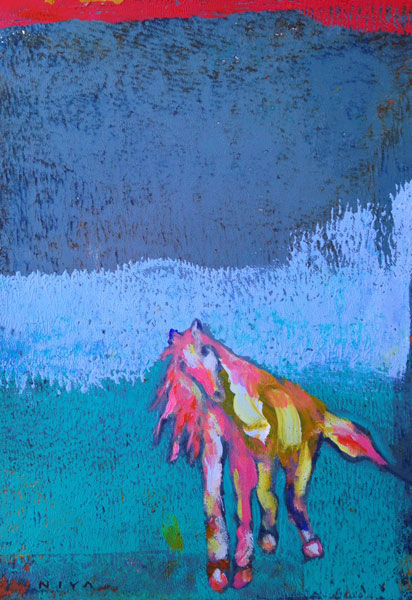 Have you ever had the sense of going somewhere… something edging into the horizon of your awareness, still to new to name, but gives you a warm feeling nonetheless?

This horse is going there. And we are too. John O’Donohue is my current poet passion. Thanks to Sherry Richert Belul.

From his poem, “Interim”

This call which is loosening/

Your roots in false ground/

From all you have outgrown.

… Going there, wherever it may be for you, take courage from the horse. All that confidence in their legs and in nature itself.

Have a great day! 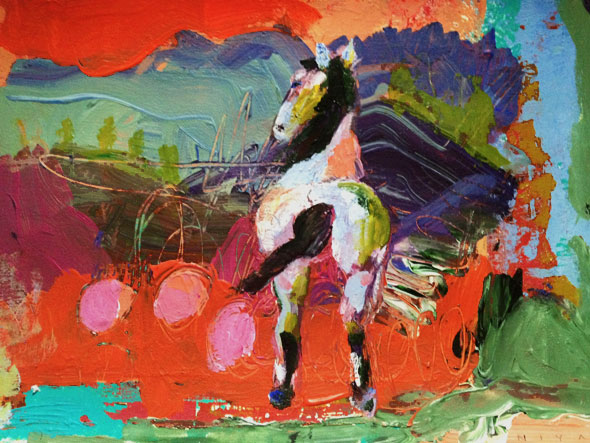 This horse is saying, “You get my butt; my backside. See where I live? See the color in that landscape and horse stories going on in that valley? I’m needed there. So if you want to keep me around, make it good!” 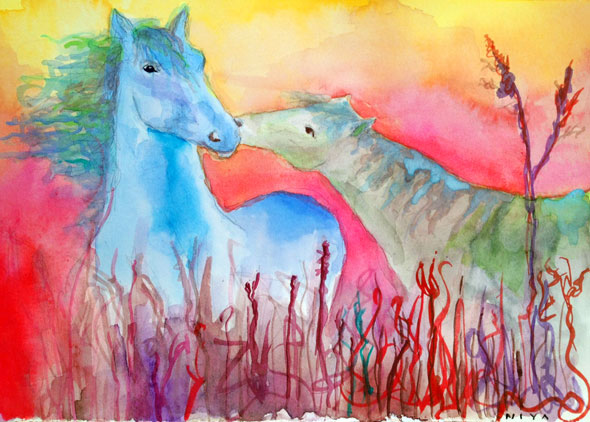 What could be said more than this? It’s love.

Smootchers to you all! And, expect a bounty of horse paintings all week—On fire in Santa Fe! 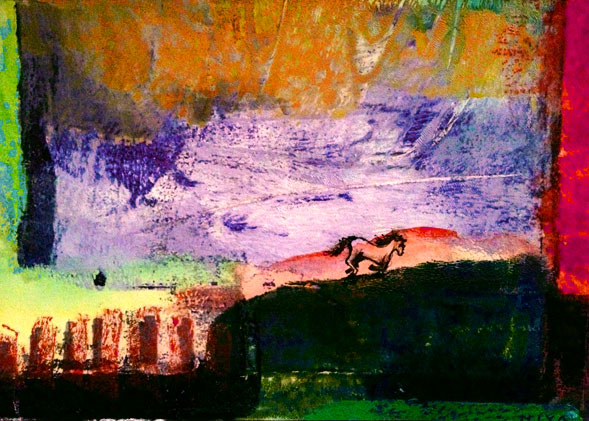 This painting reminds me of a short story I wrote a few years back. A woman named Lucie is in New Mexico on a painting commission. She paints… not the horse she was hired to paint but the horse that moves her. The horse that is being healed by the horse whisperer she’s falling for. It’s a love story from all directions. Now that I’m in New Mexico painting horses, I thought it would be a good time to share a passage or two from the story. And I’ll post the full story and provide the link before the month is out for anyone who is interested.

She painted wildly. Lucie painted like she had just discovered how to paint and didn’t have enough time to perform all her ideas. She viewed each color like it was a person, and sometimes people argued with one another–colors argued for placement. This tickled her and added a dimension of complexity to the layers. Every color has every color in it, she thought. She was pulled by the weight of a color; how it takes shape. The muscles in the horse were taking shape now, everything in the composition raced for its ultimate place—its home on the surface. She stopped and looked across the pasture at the dimly lit house where Brooks clanked about in the kitchen.

She flashed back on him with the stallion earlier. His body movements, skilled and precise, slowly building a mirror in the world the stallion could count on. How Brook’s boots were filled with the dirt the stallion kicked at him, yet, his face remained soft. She envied his contentment; she wondered what the skin of his back felt like.

Lucie put on her nightgown and kept painting. She had many nightgowns stained with paint. She just kept going back to the Goodwill to buy more. As she painted the horse’s eye memories flooded her, tore at her insides—her mother’s laughter, bad cooking and recent divorce. Her sweet dog’s death, the man she wanted to father her child—the child she lost. Sometimes life does this: it looks like a journey on the open road. And then, all too quickly events cluster together, buzz and needle at your good intentions until you can’t remember the open road—and you go faster, you fight, you run, you try to make motion exorcise the bad memories so you can be new again.

Painting faster now, Lucie felt powerfully drawn to the dim light at the house where he slept. Sending a ripple of panic, she painted faster still, oil paint flying out everywhere — in places she would discover in the morning light. 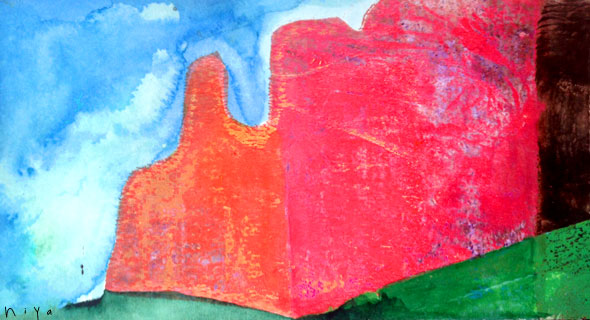 The sky here is like a tribe of people with changing moods and personal agendas. It moves from the purest blue and then suddenly a symphony of clouds, rain — emptied out to the wonderful smells of coolness in the air. The adobe structures are built to enjoy the continuous theatre that is Sedona and the Southwest.

Project notes: This is my last painting in Sedona. Off to Santa Fe to paint many wild horses. And a few adobes for the rest of the month. Wild. 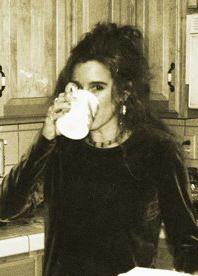 I set out to paint 365 narrative paintings and make a book about it in 2014. It's published now and sold out. This site is the archive of the 365 stories/illustrations. Currently posting new work at NIYACHRISTINE Stay connected with offers, printed and original works, classes, exhibits, and book news.

All artwork is the copyright of ©Niya C. Sisk. Do not use artwork without permission. Thank you.

February: Love & Character "Be brave enough to live creatively. The creative is the place where no one else has been. You have to leave the city of your comfort and go into the wilderness of your intuition."
~ Alan Alda

March: Fabric & Flowers "Nobody sees a flower--really--it is so small--we haven't time--and to see takes time, like to have a friend takes time." ~ Georgia O'Keefe

"When you are Real you don't mind being hurt.” ~ Margery Williams, "The Velveteen Rabbit"

June: Food & Wine “Accept what life offers you and try to drink from every cup. All wines should be tasted; some should only be sipped, but with others, drink the whole bottle.” ~ Paulo Coelho, "Brida"

July: Wild Horses & Adobe Houses “I found I could say things with color and shapes that I couldn't say any other way... things I had no words for.”
~ Georgia O'Keeffe

August: WILD{card} “A healthy woman is much like a wolf, strong life force, life-giving, territorially aware, intuitive and loyal. Yet separation from her wildish nature causes a woman to become meager, anxious, and fearful. The wild nature carries the medicine for all things. She carries stories, dreams, words and songs." ~ Clarissa Pinkola Estes, "Women Who Run with Wolves.”

September: Quirks & Curiosities “In my next life I want to live my life backwards. You start out dead and get that out of the way. Then you wake up in an old people's home feeling better every day. You get kicked out for being too healthy, go collect your pension, and then when you start work, you get a gold watch and a party on your first day.” ~ Woody Allen

October: Dogs & Doors “Look on every exit as being an entrance somewhere else.” ― Tom Stoppard

November: Fish Fabulous “…I keep looking for one more teacher, only to find that fish learn from the water and birds learn from the sky.” ~ Mark Nepo 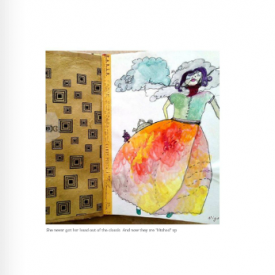 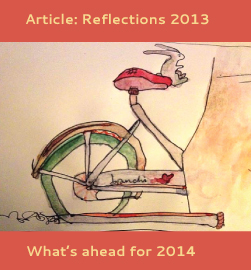